My Name is Ron…and I’m an Alcoholic…

It seemed like just another day, same old hangover, same queasy feeling ….but…..I felt a desperation like none other. I didn’t know how to stop drinking. My physical condition was rapidly deteriorating. Every day began and ended with thoughts of drinking, more often than not accompanied by such, frequently to excess. I had many thoughts of suicide, none of which I could carry out because of fear; fear of pain, fear of God, fear itself. My moral and spiritual condition was bankrupt. Alcohol allowed me to escape from my fear, from my paranoia, from my anger and hate. Most of all, alcohol allowed me to escape from God, thus allowing my troubled soul to be free. Or so I thought.

I awoke the morning of Jan 17, 1976 fearful and shaking more than ever. The day before had ended a 3 day binge. I hadn’t touched any alcohol yet and I was sick and haggard. I knew if I didn’t do something about the drinking, I would begin another binge, perhaps one from which I might not recover.

I believe without a doubt that God watches over drunks. He had been sending me messages through another alcoholic, Clarence B., who happened to be the Command Master Chief of the ship I was on. Clarence wrote several articles about alcoholism for the ship’s newspaper. I read those articles, at first because I was bored, but then because I began to recognize myself and my self-destructive behavior in them. I went to see Clarence that day and he recognized me as an alcoholic, even though he was kind enough not to call me one right out. We discussed my drinking, my feelings, and finally he offered a solution.

I went to my first AA meeting that night. A long time friend of mine, Mike C., who had about 6 months sobriety at the time took me. I was so frightened that I almost backed out at the last minute. I didn’t know what to expect. I was afraid I would have to quit drinking, but I was more afraid I’d never stop. During this meeting was the first time in many, many years that I became honest with myself. I finally admitted to God, to others, and most importantly to myself that I was indeed an alcoholic. I had known for a long time I was alcoholic, but there is a big difference between just knowing and accepting this fact. That night I found hope. Maybe I could really finally escape this monster that was determined to devour my soul and body.

The more I attended meetings and the more I read the Big Book and the more I learned about this disease, the more I became convinced that God had led me to recovery. I began to actually lose my fear of people, places, and things. I began to reconstruct my moral and spiritual being. The physical side pretty much took care of itself once I removed the substance that was poisoning my body. I started to become a whole human being again rather than a series of disjointed actions and emotions.

I had begun a journey of life. Emotionally repressed, I had to learn how to behave all over again. Alcohol has a very effective way of keeping our emotional development in check. I was a 31 year old teenager, perhaps even pre-teen. I wanted to continue to act like that, mainly irresponsibly, but knew I couldn’t and remain sober. Amazingly, my “fear” of God began to disappear, replaced by respect.

There have been many twists and turns during my sober life, including a period of self-imposed exile from the program, which thankfully was brief since my insanity had begun to return. I lost my family due to divorce only to regain custody of my children later on. I lost both parents. I had many financial woes, but was slowly solving them. I lost jobs. I gained jobs. Many “learning experiences” were placed in my path. None of this made me drink. For every obstacle I encountered, a clear solution was provided; I only had to be receptive enough to see it. This came from complete acceptance that I was alcoholic and that I was willing to become more spiritual.

I cannot count the number of miracles that have occurred to me in sobriety. They continue to happen today. The very fact that I am sober today is a testament to that fact. I live today for today; meaning that yesterday is gone, tomorrow never comes, all I have is today because of the grace of God. I pray each morning (and frequently throughout the day) that I may do God’s will, not mine. I end each day thanking God for another day of sobriety and of life. Yes, I’ve had a spiritual awakening. I’ve felt the burning bush, even though at the time it only felt lukewarm.

Today most of the time I am at peace, I know true serenity more often than not. I live my life based on the principles I have learned in the marvelous program of AA. I keep my life simple, uncluttered. It is what works best for me. I keep active in sobriety, attending meetings, doing service work, reading literature, and working with others.

I will likely do some minor updates to this story soon as recovery does continue.

Epilogue…or my search for spirituality

If you think you can identify with any of this, please call your local hotline and ask for help. We do so willingly.

Read the Epilogue to this story….

If you tell the truth you don't have to remember anything. ~Mark Twain

A half truth is a whole lie. ~Yiddish Proverb

A lie may take care of the present, but it has no future. ~Author Unknown

Honesty is the first chapter of the book of wisdom. ~Thomas Jefferson

(quotes courtesy of The Quote Garden) 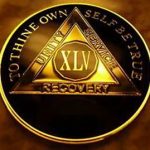