A Journey Towards Spirituality

The program of Alcoholic’s Anonymous, the fellowship, and sponsors kept telling me to find a “God of my own understanding”. So, just how did I go about this?

From childhood I was raised in the Catholic faith. My parents took me to church, I went to catechism, even attended a Catholic high school. All during this time my idea of God was being formed. I learned that God was very strict, even worse then the nuns, and that no matter what I did I was bound to roast in hell for eternity. At least that was my perception. So I grew up in fear and under their control until I discovered a wonderful solution called alcohol.

Alcohol allowed me to escape, even if temporarily, this terrible fear. Figured if I were going to spend eternity in hell I might as well make it worthwhile. So I did.

I quit attending church, lived to excess (inasmuch as I could afford it), and had the morals of an alleycat. Actually, think the alleycat high higher standards.

After coming into AA and getting a (very) little sobriety and having a wife that converted to Catholicism, I found myself falling back under the control of the church. It was the only God I understood. My wife had found out about my cheating and somehow got me to agree to getting remarried in the church. I knew this was a bad idea but I didn’t consult a sponsor about my hesitation and my feelings of guilt for my indescretions. We went ahead with the church wedding.

Of course the marriage didn’t last anyway and I moved along. I tried going back to the Catholic church but found similar attitudes so just stopped attending again. I thought I would go out and search for this elusive “God of my understanding”.

I tried New Age, got very involved in that for a while even believing that us “chosen” we actually aliens from another planet and had lived many times before. I was declared an “old soul”, meaning I had a lot of past lives. One woman even told me I was her brother in a past life and that I had killed her but she understood why I did that. Finally I figured out something was not right about this either. No God of my understanding hiding there.

I tried studying some of the eastern philosophies but couldn’t really get into that either. Mostly they had dead gods and I still felt mine was living.

I did talk a good talk about knowing this God, but it was mainly lip service. My life was changing for the better though, so I felt that maybe I did understand God.

Eventually I tried the Catholic church again, but this time I got a different message. It just seemed that the priests were always asking for money. That turned me off.

So, I just quit going again. I had a sort of God that was faithful and trustworthy. He seemed to listen when I prayed. I began to slowly understand that God was working in my life even though my conception was incomplete.

Years passed and I began to feel closer to God. Something was still missing and I just couldn’t put a finger on what it was. So I went looking again. This time I ended up in a Unity church. Many alcoholics had become ministers in this church and I thought that maybe they knew something I didn’t. I stayed for a bit over a year, enjoyed the meditation and music but still felt like an essential piece of the puzzle was missing. I had issues with no satan and the father/mother god concept. They promoted that God could be what ever we wanted it to be. Essential in a God of our understanding but incomplete to me.

Several events happened that brought me to where I am today. At work a still studying evangelist passed on much information about scriptures and Jesus. This would happen during slow times on our night shifts and most of the team participated. I listened and learned. Then I began to attend a non-demoninational church (a big no-no to Catholics). The church was a Bible based church and the pastor revealed a living, loving God. The light switch was turned on.

What I found was a forgiving God who through His son Jesus Christ had redeemed the world from sin. It is only by His grace and a little willingness on my part that my eyes were opened and I began to see the light of the truth. It took another evangelist, Stephen Hill, to awaken a passion for the Lord in me. I had watched tv evangelists and how they touched the foreheads of people and they fainted. I made an altar call and he touched my forehead and said, “May the power of the Holy Spirit enter into you”. I woke up on the floor, thankfully some folks had caught me. I became a believer that day.

Today I am aware of the truth and the God of my understanding is omnipotent and has given me the keys to the kingdom. No longer do I have to fear eternal damnation, and I live life today as much in line with God’s instructions as humanly possible. I still stray but I know God understands and will forgive me as long as I fully admit my weaknesses and repent. This has opened up a whole new reality of recovery for me.

I always believed in God. Through AA I began to have faith in God and eventually even trust God. But that, for me, isn’t enough. I learned also to love God and be forever grateful for His sacrifice of His son on the cross for me. As I live more is being revealed to me.

I know this is rather lengthy, but my journey was lengthy too. AA and the fellowship brought a lot of peace and serenity into my life, God has just deepened that.

If you don’t have a God of your own understanding, I’m willing to share mine with you. It’s completely free.

If you think you can identify with any of this, please call your local hotline and ask for help. We do so willingly.

If you tell the truth you don't have to remember anything. ~Mark Twain

A half truth is a whole lie. ~Yiddish Proverb

A lie may take care of the present, but it has no future. ~Author Unknown

Honesty is the first chapter of the book of wisdom. ~Thomas Jefferson

(quotes courtesy of The Quote Garden) 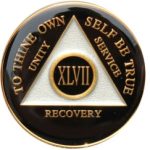